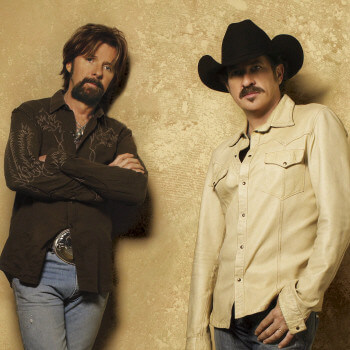 GRAMMY-Nominated duo Brooks & Dunn revealed today that they will hit the road this summer for their first nationwide tour in ten years. Brooks & Dunn REBOOT 2020 Tour will kick off in St. Louis, MO on 5/15 and will see the four-time “Entertainer Of The Year” winners bring their infamous “revved-up, theatrical” (NPR) show to audiences they haven’t played for in a decade.  The 2019 No. One chart entry of their REBOOT album has served as a springboard for the most successful duo in history to pick up right where they left off in 2010. Tickets will be available first as part of the Live Nation Country Megaticket and more information will become available at brooks-dunn.com in the coming weeks. Live Nation is the official tour promoter.
Copyright © TheGreenRoom | All Rights Reserved 1.14.19

Reba McEntire will be hitting the road on a solo tour next year, but that won’t keep her from doing two dozen more dates with Brooks & Dunn in Sin City in 2020.  This will be the fifth year for  Reba, Brooks & Dunn: Together in Vegas , making it the longest-running country residency in the gambling mecca’s history. The show at The Colosseum at Caesars Palace features more than thirty hits, plus a ten-piece band made up of players who work with both Reba and B&D.